Twice Upon A Rhyme 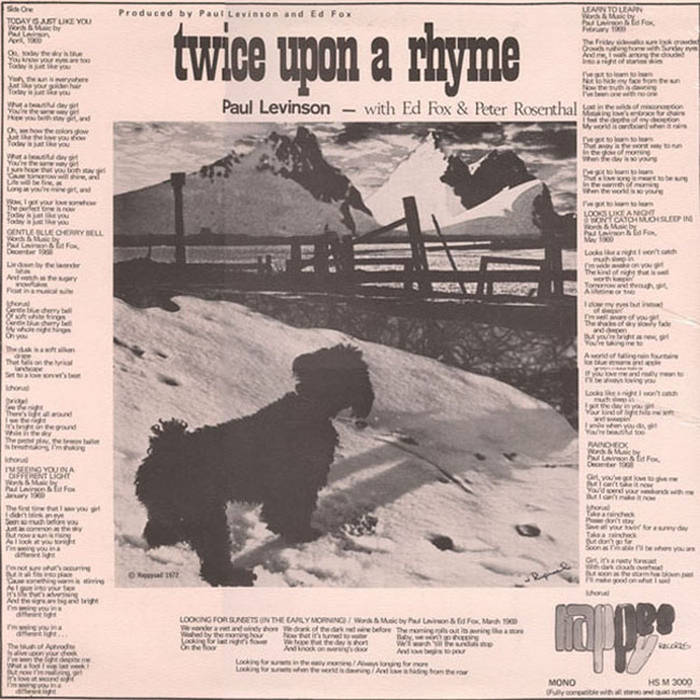 In 1972, Paul Levinson released Twice Upon A Rhyme, with Ed Fox, Peter Rosenthal, Boris Midney, Donny Frankel, Mitch Greenberg, Jay Sackett, Alan Fuhr, Jesse Stiller and other musicians on HappySad Records - a mix of sunshine pop and folk-rock psychedelic. South Korea's Big Pink/Beatball reissued Twice Upon a Rhyme on CD in December 2008 and Vivid Records did the same in Japan in 2009. Whiplash/Sound of Salvation released a vinyl remastered re-pressing in December 2010, and again in 2012.

Praise for Twice Upon A Rhyme:

“Paul Levinson writes songs that are catchy and colorful. With a storied career that includes working with songwriting legend Ellie Greenwich, Levinson released folk and pop gems in the sixties and seventies. Fans of Simon and Garfunkel, Del Shannon, Brian Hyland, Spanky and Our Gang, The Zombies, The Vogues, and Strawberry Alarm Clock will love listening to Paul Levinson.” -Modern Music Maker (March 23, 2018)

"I managed to track Paul Levinson down and his Twice Upon a Rhyme album became the first release on the label." - Anthony Nyland, Backseat Mafia (March 27, 2017)

“Tim Hardin meets The Zombies ... a real forgotten gem from 1972 that serves as perfect listening on a Saturday morning in November ... warm and peaceful.” -Choreographer of the Hill (Nov 9, 2013)

“Twice Upon a Rhyme (Happysad ‘72): I’ve seen multitudes of folkpsych wannabes hyped to the skies for their garage charm in euro lists that don’t hold a candle to this baby. “Forever Friday” is so amazing and lo-fi real I still get chills when I hear it. And the long track “The Lama Will Be Late This Year” sweeps whatever floor is left in this department.” -Paul Major, Enjoy the Experience (May 1, 2013)

“... mixes the psychedelic pop of the ‘60s, a dash of Simon & Garfunkel and some expansive and imaginative arrangements which recall the Beach Boys or even Burt Bacharach in places. There’s a real warmth and love running through these cuts ...” -Phil, Norman Records (Sept 19, 2012)

“The vocals are reminiscent of a live Beatles gig, I haven’t seen them live but my grandma said they are quite good.” -Daniel Thomas, Independent Music News (Feb 6, 2011)

“Had this record been released in 1968-1970 and with the support of a major label it would have been hailed as a psych pop masterpiece.” -George Cannon, Way Off the Grid Radio (Dec 12, 2010)

"In recent years the album has gone from an unknown collectors' gem to a much more widely known (and acclaimed) folk-rock recording." -Evan LeVine, WFMU Beware of the Blog (Dec 5, 2009)

Paul Levinson recorded w/ Stu Nitekman & Ira Margolis as The New Outlook (The Other Voices) for Atlantic Records, 1968. In 1972, he released an LP, Twice Upon a Rhyme on HappySad Records. Big Pink, Vivid & Whiplash all re-issued the LP, 2008- 2012. Old Bear Records released a new album of his sci-fi songs, Welcome Up: Songs of Space and Time, in early 2020, w/ vinyl on Light In the Attic Records. ... more

Bandcamp Daily  your guide to the world of Bandcamp

Featured sounds from Fly Lo and Ahmed Idris, plus Mother Nature hops on to drop off new project